Casting a perfect gearbox housing for a very special car

Tests of a prototype for an ecological hybrid sports car with a classic car appearance, first presented in 2012, led to geometrical modifications to the gearbox housing. SICTA, based in Belfort, France, and a specialist in aluminum prototype castings, had already delivered the first gearbox housing (figure 1) for this very special car. The challenge was to ensure that the geometrical changes would not be critical for maintaining the good quality level already reached for the first prototype, and in the meantime the car maker also demanded a general cost reduction.

SICTA was the first company in Europe to have exclusively used 3D printed molds and has been using MAGMASOFT® since 2009 to develop their foundry processes. A first study of the gearbox housing casting had been made at the beginning of the project in 2012. Multiple versions had been simulated step by step and allowed SICTA to determine and to validate the rigging system and the pouring conditions. Specific data for 3D printed molds had been generated in 2015.

A first virtual Design of Experiments calculated with MAGMASOFT® at the beginning of 2016 helped SICTA to settle on some process parameters like metal pouring conditions through the different sprues. These parameters were then considered as invariable. In order to optimize the soundness and the production costs, the company decided to set up a further virtual Design of Experiments, taking into account the following variables:

The objective was to optimize the soundness in the whole casting. 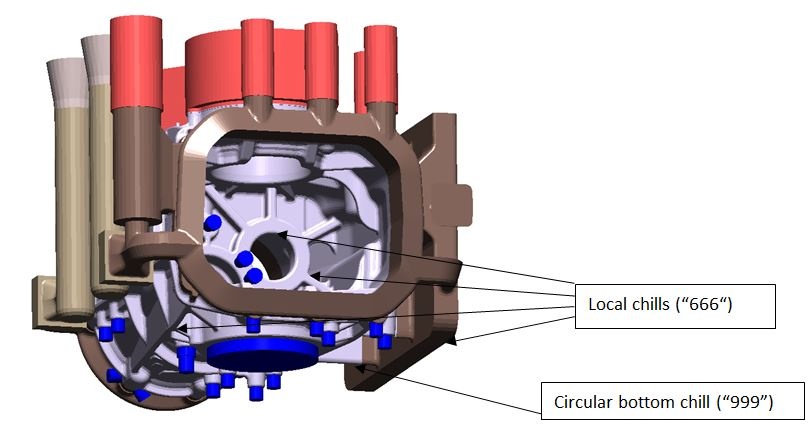 36 designs were automatically calculated as a result of all the value combinations of the variables. Each simulation of a design involved simulation of filling and solidification for a precise temperature distribution and a most accurate soundness prediction. The calculation time of the whole virtual Design of Experiments was rather short - it did not take more than 24 hours. The “best” design in terms of soundness was number 15 (pouring temperature 760 °C, Si content 7 wt.%, and only the bottom chill activated). This was opposed to the “worst” design, where the potential defects were spread over four different areas of the casting. (figure 3). 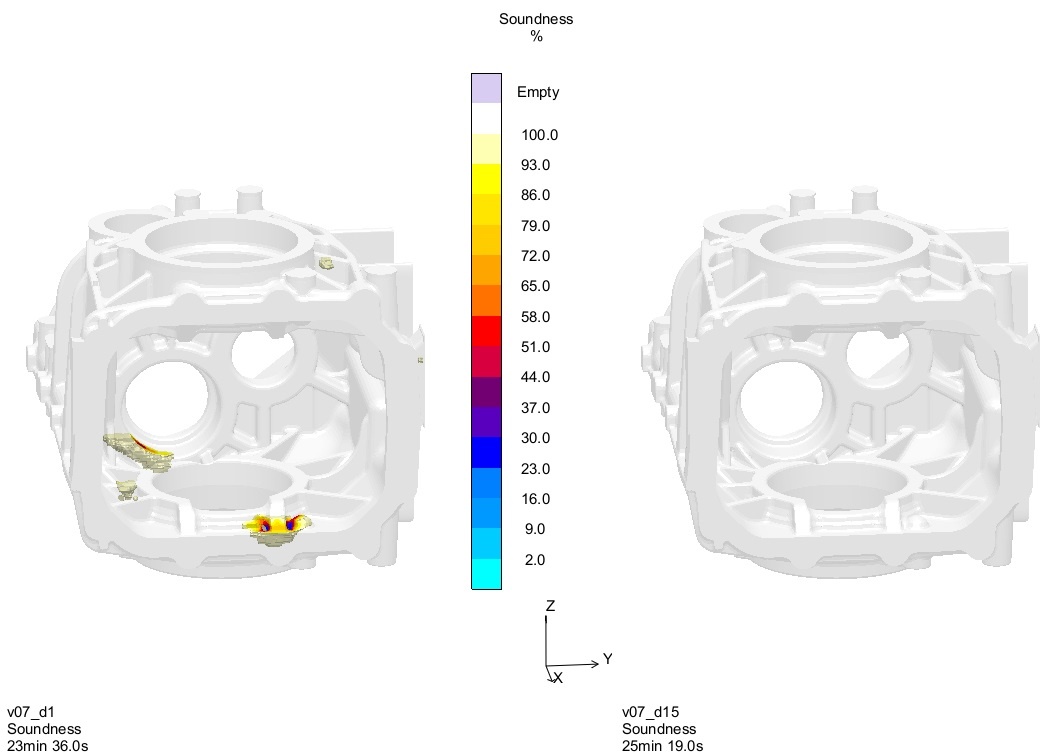 The two plots on the right side of the main effects diagram (figure 4) show that the use of chills had a positive influence on the soundness. The lowest soundness value was reached when no chill was active, whereas the highest soundness had activated chills. The different slopes mean that the circular bottom chill (“999”, top right) has globally a stronger effect than the local chills (“666”, bottom right). The bottom left plot shows that a higher pouring temperature also has a positive influence on soundness. The effect of the silicon was almost negligible, as shown in the top left plot. 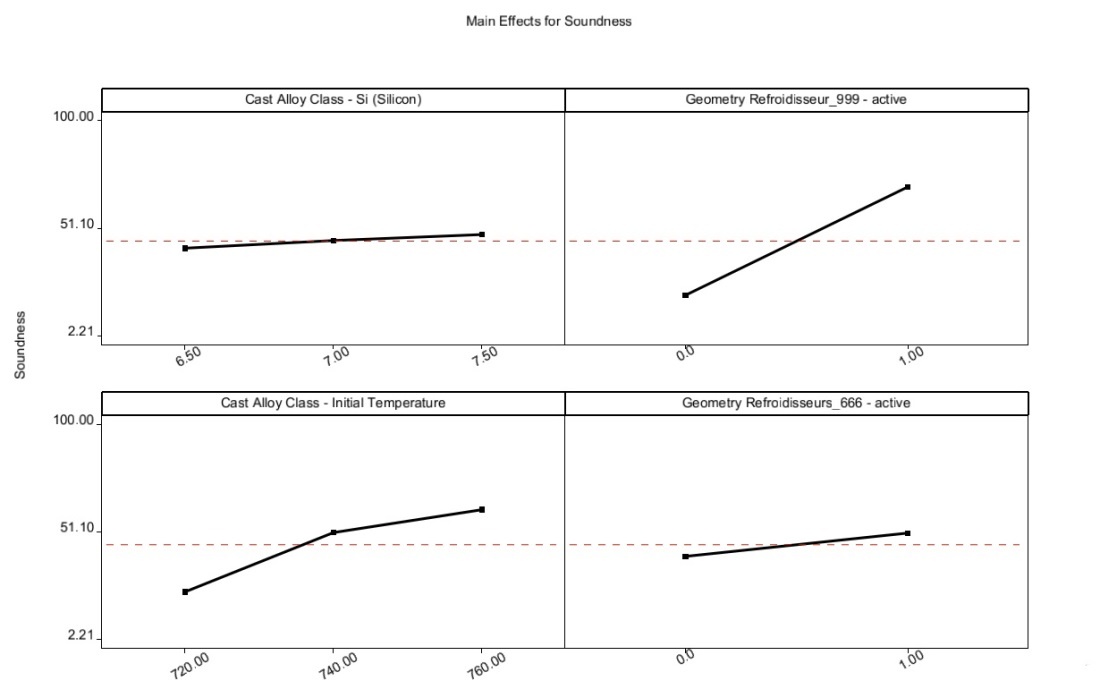 Main effects of the variable parameters on soundness 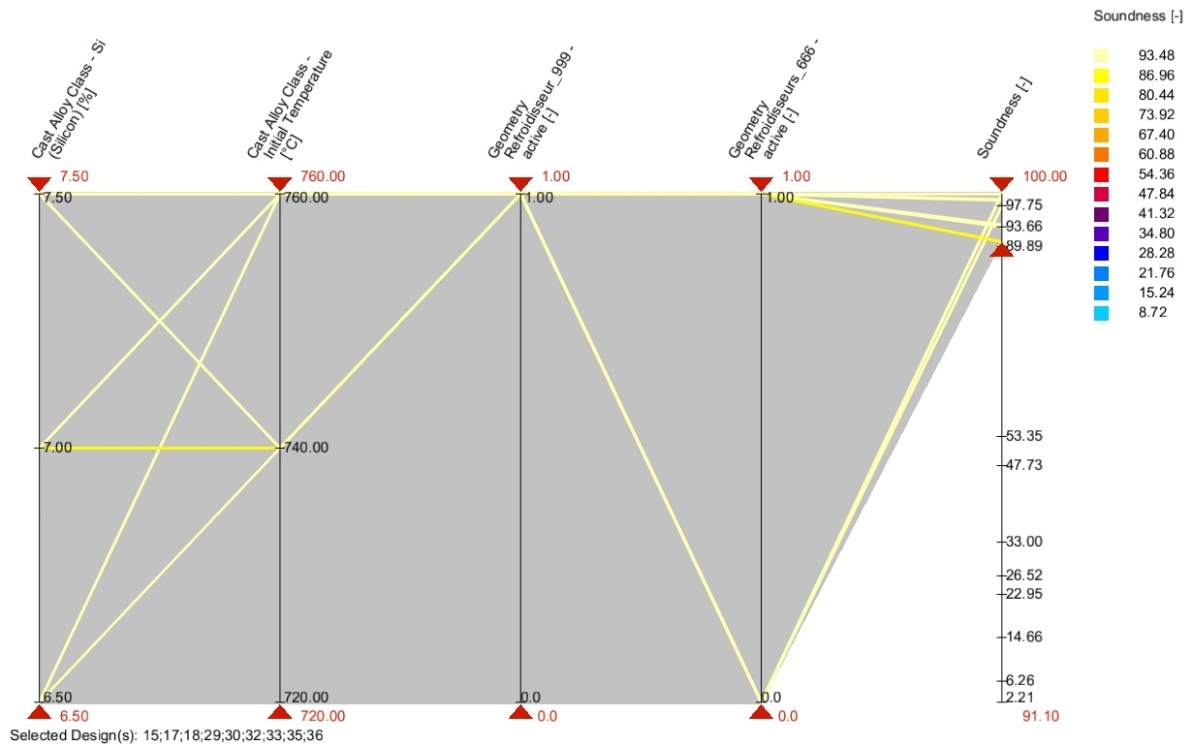 Assessing the parallel coordinates diagram showed that to ensure a soundness value of at least 90%, it was necessary to pour with a minimum temperature of 740 °C and the circular bottom chill (“999”) had to be active. This diagram can also be used to quantify the impact of process parameters on the final quality. For example, setting the pouring temperature at 720 °C leads to low soundness values (maximum about 53%, figure 6), no matter what the silicon content may be or if the chills are activated. On the contrary, bringing the temperature up to 740 °C ensures a better quality. 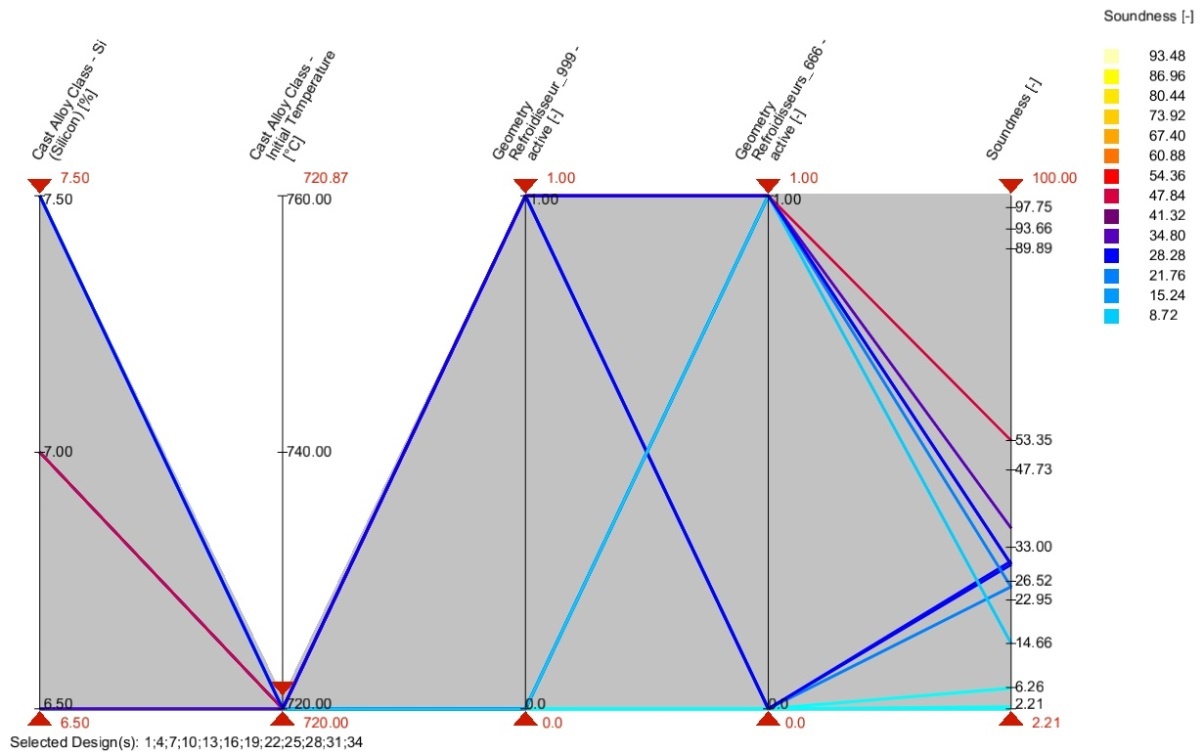 The virtual Design of Experiments confirmed the minimal required process conditions. The layout finally chosen by SICTA for the pilot production corresponded to the following parameters:

5 housings were successfully cast under these conditions, and CT scans showed the right decisions had been taken (figure 7).

SICTA was able to support their customer with the geometrical modification of the casting, allowing an early consideration of the foundry process. For this particular prototype casting, SICTA could quickly and independently determine the ideal production conditions, while ensuring part quality and lower costs at the same time. Meeting the customer’s requirements for a perfect gearbox housing became possible with the help of MAGMASOFT® Autonomous Engineering.