Třinecké železárny (TŽ) is a well-known producer of cast ingots. Reliable and stable production processes and high quality and cleanness of all products are constant requirements. Due to the continuously increasing demands for both, improved quality and, at the same time reduced costs, TŽ recently decided to revise and subsequently optimize their entire ingot casting line.

For an effective revision of the complex production processes, the experts at TŽ needed adequate tools. They quickly recognized the potential of the latest release of MAGMA5, offering autonomous optimization and tools for an effective evaluation and assessment. 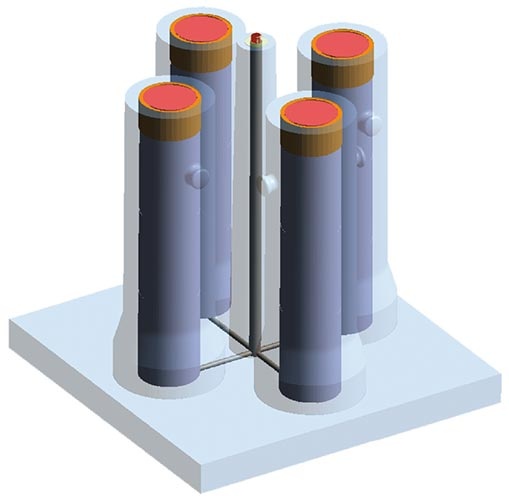 The first ingot chosen for an optimization was a slim, tall, cylindrical steel ingot with a weight of approximately 5 tons, cast in a cluster of four. For stripping purposes, the original shape of the ingot resembled the letter “A”, providing inverse conicity. With this shape, TŽ had produced good quality ingots thus far, but to meet new specifications, the amount of centerline macroshrinkage had to be reduced. The optimization target was to develop an improved casting shape by autonomously simulating a number of possible solutions. 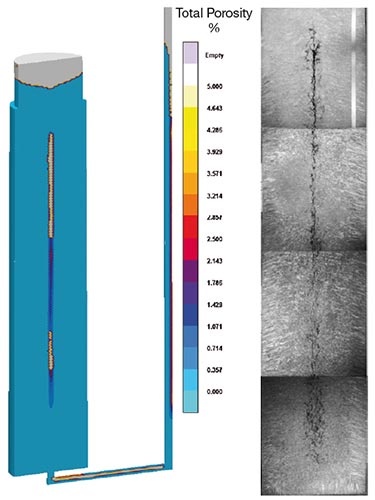 A combination of design of experiments and genetic algorithms should be used to investigate the impact of possible variations of the ingot body, its head and insulation. Also, the layout of the steel die was open to modification, to support optimal robustness of the casting process and meet the new quality demands.

First, the engineers from TŽ analyzed the current production process to identify the root causes for the observed macroshrinkage. One of the ingots was sectioned and the porosity was analyzed. Subsequently, the steel die was modified to position five thermocouples along the height of one of the four ingots, allowing for precise temperature measurements during the casting process. These temperature recordings were then used to obtain optimal height-dependent heat transfer coefficients for MAGMASOFT®, matching the measured and calculated temperature curves.

Based on the good agreement between the simulation and reality, the next step was to set up an autonomous optimization following multiple objectives. To identify the best set of process parameters and geometrical features, two objectives were defined:

Since a casting free of macroscopic shrinkage was required according to the new specifications, the allowed porosity in each of the evaluation areas of the ingot body was set to 0 %. In total, 11 independent casting and geometric design variables were used in the optimization procedure, covering the flow profile during teeming, the dimensions of the ingot, its head, the insulating sleeve as well as the steel die and the pouring temperature. MAGMA5 was then used to autonomously generate a first set of designs and eight following generations. The created and tested variations were comprehensive, and they covered options not exploited by the engineers by practical trials in the past.

The engineers evaluated the analyzed designs in the assessment perspective. According to the ranking, the top five designs led to similar values regarding the objectives, offering the engineers the chance to select the best design out of those five in terms of costs of production.

The evaluation of the main effect diagrams revealed a strong correlation between the height of the ingot head with the centerline and macroporosity.

Below a critical height, considerable macroscopic shrinkage porosity and centerline shrinkage form in the ingot body. These designs were unacceptable for TŽ and therefore excluded from further assessment.

Main effect diagrams: Influence of the height of the ingot head on macro- and centerline shrinkage

o draw a final conclusion, the engineers evaluated the effects of the remaining geometrical parameters. The best design features a “V”-shape instead of the formerly used “A”-shape, significantly improving directional solidification. In addition, the new shape of the ingot head is conical and not, as previously, straight. Together with a modified insulating sleeve, this design provides the best overall results in terms of feeding efficiency. The macroporosity results of this new design are in compliance with the customer’s requirements. A remaining amount of microporosity is also within the specification, as previous research at TŽ has proven that the subsequent forging will close this porosity entirely.

At the end of the optimization process, the TŽ engineers had successfully used the means of autonomous optimization to significantly improve the ingot casting process and meet the new requirements, saving time and resources. 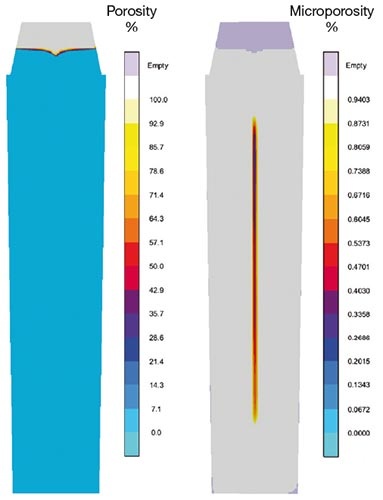 Třinecké železárny / Moravia Steel is the biggest steel producer in the Czech Republic, dating back to the early 19th century. Together with numerous subsidiaries, the company ranks among the most significant industrial groups in Mid-Europe. At present, their products are exported to more than 60 countries all over the world, covering the production of rail, wire rods, semi-finished products such as ingots, rolled blooms, billets and slabs, etc. Třinecké železárny has long a tradition of using MAGMASOFT®.