The idea of combining the production of chains and jackets at the same time in one family mold seemed brilliant! It was a way to increase the productivity. However it turned out during the mass production that this option did not deliver a good result.

There were quality issue with both sand cores, the obvious reason was the significant different of the chain’s and jacket’s geometry. Both sand cores were produce using the same process parameter in the core shooting machine, which also contributed to the quality issue.

The jacket’s quality issues were unfilled areas as well as burnt surface. The chains had a significantly greater mass compare to the jackets suffered from uncured region which led to another problem during the handling and storage: the parts easily broke due to less mechanical properties. And also during the metal casting process: core gas problem in the aluminium part due to the high residue of the binder.

Through simulation it was possible to fully understand the root cause of all the above issues. The unfilled areas for the jackets were caused by insufficient air vent. The burnt surface for the jackets and the uncured region for the chains were the result of using the same heating process and curing time. Both parts needed a different heating parameters and curing time which could not be delivered by the current arrangement. 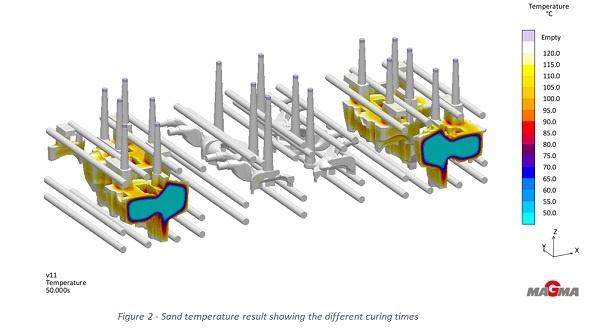 The unfilled area for the jacket was simply solved by placing additional air vent in the correct location. The propose solution for the curing process was to de-couple the heater arrangement and temperature control. After both suggestions were implemented the productivity target could be realized and the production cost could be kept below the original goal. 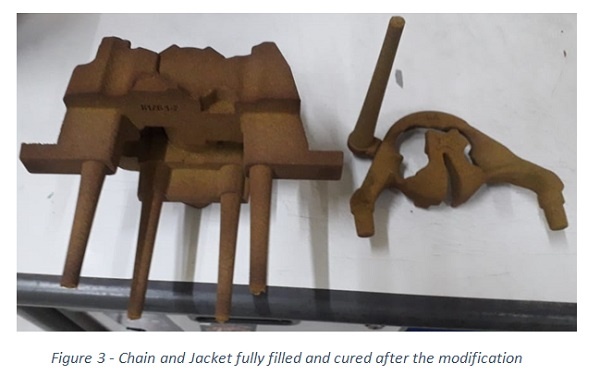