DANA Spicer has used MAGMASOFT® to develop unconventional gating systems for ductile iron components for the heavy truck industry. In one case, they used simulation to check filling patterns and optimize the gating system of a ductile iron carrier. In production, the casting had a scrap rate of around 17%. 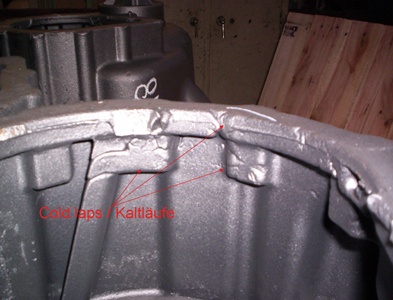 Simulation showed that turbulent flow induced erosion in the mold. A large free surface led to oxidation of the metal and consequently to slag generation. Low temperatures on the metal front and uneven local filling times provoked cold laps.

The new layout resulted in higher melt temperatures during filling, and the sufficiently vented cavity reduced the filling time from 12.5 to 10 s. The improved gating system reduced costs, scrap was cut significantly and yield increased by 10 %. The costs for the redesigned gating system were minimal.

All in all DANA saved more than US$ 500,000 on the series-production component using simulation.