A steel foundry in Indonesia which is a subsidiary of a Japanese machine maker for construction and mining industry was facing quality issue with one of their parts: the Bearing Housing. Being a MAGMASOFT® license user in Japan, they decided to consult MAGMA Singapore for assistance in identifying and solving this steel casting issue. MAGMA Singapore, being the headquarter for MAGMA in Asia Pacific region, is not only providing licenses and trainings but has a vast track record of quickly solving various casting defect issues through engineering services.

The bearing housing was already in production for quite some time; the casting defect did not really lead to a casting reject however they needed to spend a lot of resources (money and time) for repairing it through welding process. Several attempts on resolving this issue by the means of conventional trial and error did not succeed. After a few round of discussion with MAGMA engineers, the foundry engaged us in the hope of reducing the quality issue as welding was not a feasible option in the long run.

The first round of simulation on this bearing housing part was to find out the root cause of the casting defect so both parties could clearly understand the objective of the optimization project. The simulation result showed that the casting defect correlate to the re-oxidation inclusion (Pic 1) instead of shrinkage porosity which was assumed in the beginning. One critical aspect is the unique capability of MAGMASOFT® in predicting the reoxidation inclusion defect, as MAGMASOFT® is currently the only casting process simulation software, capable of doing so. 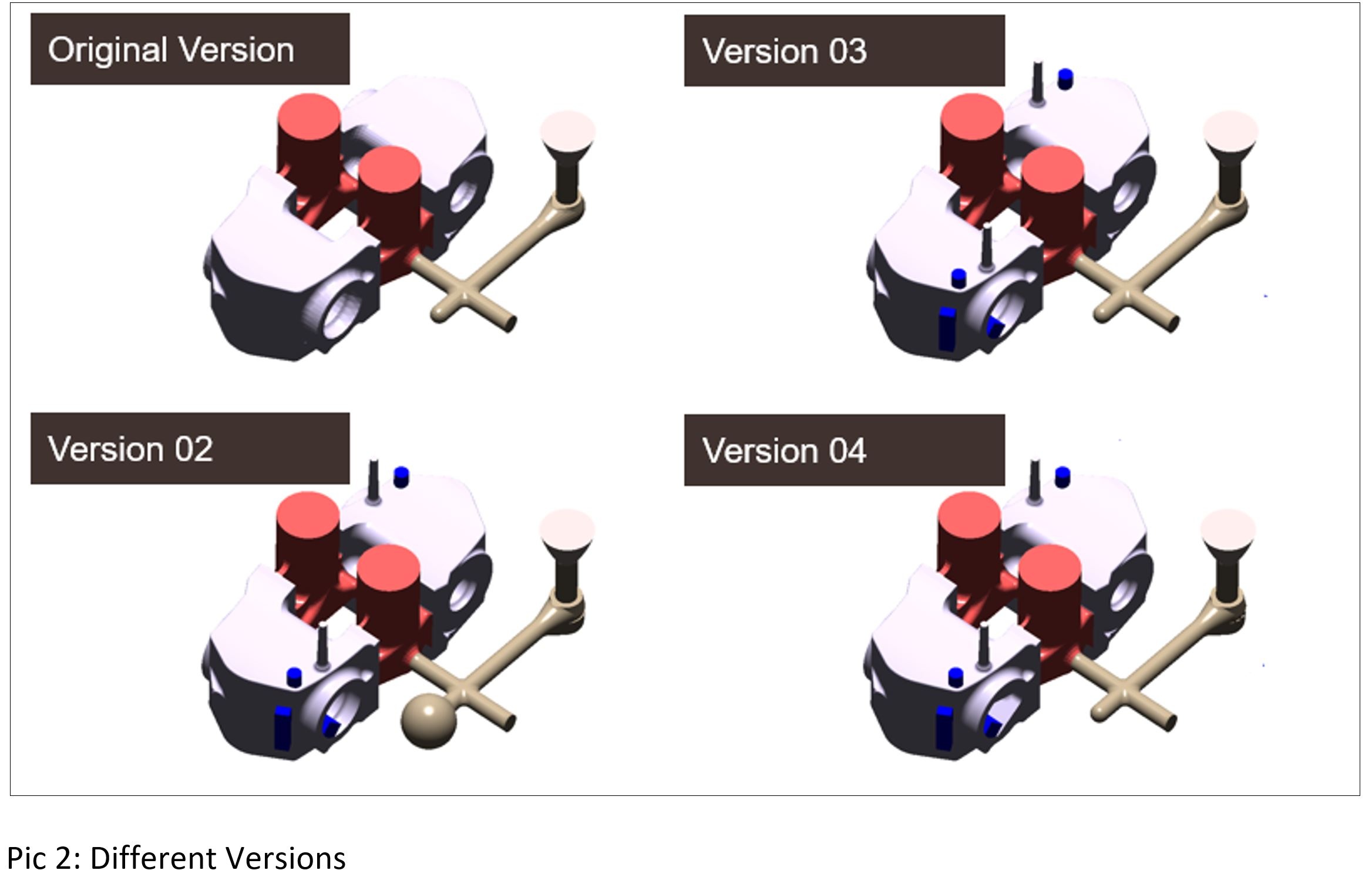 The optimization project had a clear objective now: to reduce the reoxidation inclusion. Possible design modifications and constraints were discussed and finally there were 3 different modifications allowed to be implemented: the usage of chill, different runner design as well as additional machining allowance. See Pic 2: Different Version which was given by the foundry.

The chill was added to reduce the centreline shrinkage or also known as microporosity which was also present even though it was not the reason for the quality issue. Both the runner modifications and additional machining allowance were the changes intended to eliminate the reoxidation issue.

Instead of calculating the 3 new versions, a virtual Design of Experiment was prepared using MAGMASOFT® autonomous engineering technology. Total 8 different designs were created based on the combination of the 3 above variables. Even though there were more designs to be calculated for a virtual DoE, there was one significant advantage to proceed with this method: to determine the relationship between the variables (input) and the casting defect (objective). In other words, it is used to find cause-and-effect relationships. As for the objectives for this virtual DoE were the reoxidation inclusion (Inclusion Area), the turbulent during filling (Smooth Filling) and the centreline shrinkage (Microporosity).

The calculation time for the virtual DoE took about 48 hours, based on overview table (see pic 3) design number 5 was identified as the best compromise for all 3 objectives. Even though design number 5 did not deliver the best result for the Inclusion Area as well as Smooth Filling, the different was negligible.

The main advantage of the virtual DoE could be seen in pic 4: correlation matrix. The variable which can really help the foundry to reduce the reoxidation inclusion problem was to add the machining allowance. The different runner design could reduce the turbulent filling however less turbulent did not mean less reoxidation inclusion problem. The chill was only helpful for microporosity reduction.

As all constrains were taken into account at an early stage, it was easy for the foundry to implement the proposed design into the production. 80 casting parts were manufactured to measure the success of the applied modification. The inspection of the casted parts was a perfect match with the simulation, there was no more quality issue. Safe to say, the foundry was very satisfied with the outcome as this entire exercise was completed within a short time frame of 3 weeks and provided savings of more than USD 20,000 per annum.