WEG, a Brazilian company manufacturing electric motors for industrial and domestic applications, were faced with a high level of inclusions on a machined surface of a new grey cast iron electric motor housing produced on a Disamatic. WEG decided to use the 6-sigma methodology and MAGMASOFT® autonomous engineering to identify and solve these inclusion problems.

The casting for 40 kg electric motor housing, weighing 9.6 kg was cast with a gating system resulting in a filling time of 11.6 s. After varying filling time, gating velocity and mold compaction, a first shop floor investigation showed that the gating system velocity seemed to have the most important influence on the defect occurrence. In order to identify the best gating system for casting quality allied with lower costs and development times, WEG decided to apply the new methodology of Autonomous Engineering to understand the root causes of the defects. At the same time, they wanted to find the best possible solution to eliminate them, while keeping the good productivity of the current layout. 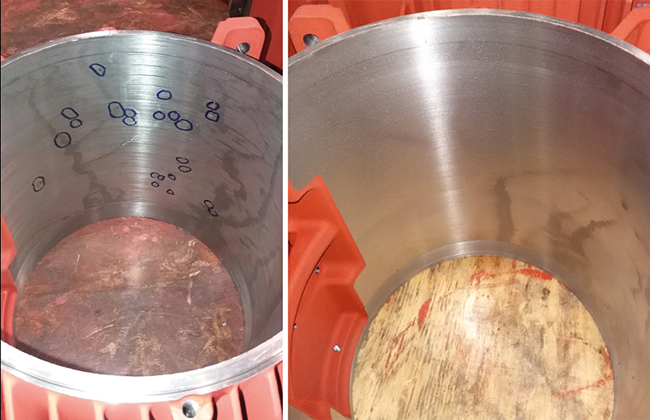 The defect analysis with MAGMASOFT® started with reproducing the original conditions and environment of the casting process and the gating system. This showed that the inclusions were caused by both reoxidation and sand erosion. As the engineers could not clearly identify which of these was the main cause for the observed problems, they decided to further investigate both objectives in the optimization process. However, the filling time could not exceed 12 seconds to continue to ensure optimal productivity.

The gating system was parametrized using 12 geometrical variables, resulting in a possible 4096 combinations. However, to keep the task efficient, the number of variables and experiments were decreased with the goal of quickly identifying the most critical tendencies. This finally resulted in a first Design of Experiments (DoE) with 16 differerent gating designs, with the aim to find a variation suitable to reduce sand inclusions and air entrapment at the same time.

The assessment showed a strong correlation between the gating geometry and reoxidation, but there was no clear tendency to solve the sand inclusion defects. The best gating system was tested to produce 50 parts, with the purpose of further reducing reoxidation combined with the best compromise for filling time, a smooth filling and sand inclusions.

The final result showed that 100% of the parts were accepted, with 52% showing no inclusions and 48% with one small accepted spot. The engineers were able to conclude that the most important defect had actually been reoxidation inclusions. The new, optimized gating system had been designed in a curved shape for a smoother filling, which helped to drastically reduce the number of inclusions.

After the best project concept had been found and tested with MAGMASOFT® autonomous engineering, the WEG engineers took a final step to even refine it. With a new DoE they focused on creating a reliably robust production.

Apart from the robust quality improvements achieved the new gating system also turned out to be 1 kilogram lighter than the previous one. This increased the metallurgical yield from 80.8% to 82.4%. 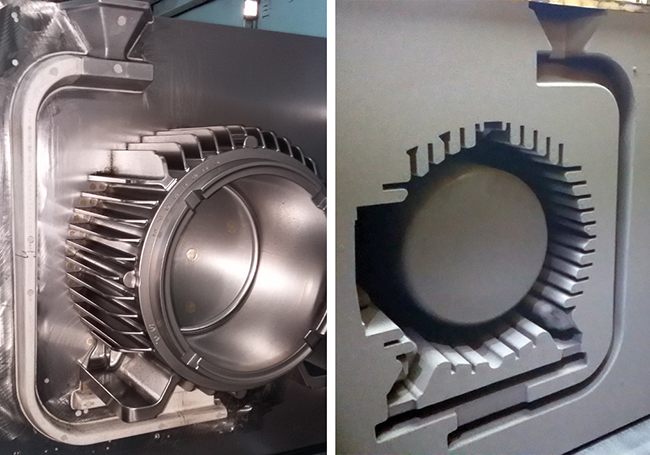 WEG, Brazil, is a leading manufacturer of motors, electric machines and automation solutions for global industries and energy systems. The company has four foundries, each of them with specific molding processes for gray cast iron.